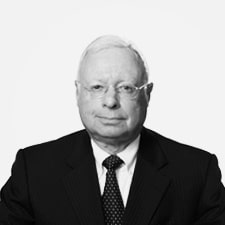 Prior to joining Davidson Berquist, Mr. Gowdey practiced all aspects of intellectual property law for both domestic and international clients. Mr. Gowdey has extensive experience litigating intellectual property cases before juries in the federal court system, as well as cases at the International Trade Commission. He has argued before the Supreme Court in Holmes v. Vornado, a case dealing with the jurisdiction of the Court of Appeals for the Federal Circuit (CAFC), and has an appellate practice including numerous arguments at the United States Court of Appeals for the Federal Circuit, as well as the 4th, 5th and 10th Circuits. Peter also has extensive experience in developing intellectual property strategies, client counseling, conducting intellectual property audits and valuing intellectual property rights, and in developing and obtaining intellectual property rights for clients. Mr. Gowdey was an Examiner in the electrical arts with the U.S. Patent and Trademark Office and, between 1970-75, was Associate Patent Counsel with Burlington Industries, Inc. where he specialized in licensing and related negotiation efforts, patent litigation and prosecution in mechanical, textile and machinery control areas. Since 1975, Mr. Gowdey has litigated in a variety of areas including: various automotive components, polyurethane foam, textile products and processes, solid state devices, control systems including circuitry, pharmaceuticals and a variety of manufacturing processes. Mr. Gowdey has lectured on a variety of patent and patent litigation subjects for a number of years in the United States, Japan and Europe. Mr. Gowdey has been a lecturer with the Patent Resources Group (PRG) having developed and lead the Patent Litigation Course, as well as counseling at the Advanced Patent Application and Amendment Writing Workshop. He has also lectured on patent litigation at the Georgetown University National Law Center, and on international trade at George Washington University. He has been an Adjunct Professor at the George Mason University School of Law since 1995 where he teaches patent litigation.