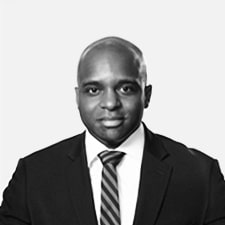 Kimani Clark specializes in computer and software patent law and, in particular, patent litigation, cross-licensing, patent studies and counseling, and patent prosecution. His experience includes pre-litigation patent strategies and negotiations, management of large-scale patent studies, performing infringement and validity analysis, preparing patent opinions and managing and performing patent prosecution. His areas of technical proficiency generally include software, computers, business methods, electronics and electrical engineering. He has worked with patents and technologies spanning these and other technical areas.
In his patent practice, Mr. Clark has represented some of the leading computer and software companies in the world. Mr. Clark’s experience includes the representation of:
+ a large financial services company in defense of a claim of patent infringement on a business method patent, resulting in a favorable settlement
+ a software company in its patent litigation in the Eastern District of Texas against fifteen companies involving computer and software technology
+ a large semiconductor and electronics manufacturer in litigation in the Eastern District of Texas involving patents related to semiconductor technology; the company was involved in over a dozen related lawsuits worldwide
+ one of the world’s largest electronics and semiconductor manufacturers in a multi-patent suit regarding semiconductor manufacturing processes, resulting in a favorable settlement
+ one of the world’s largest software/computer companies in cross-licensing negotiations with other large high-technology companies; these projects involved the study and analysis of hundreds of software patents + a large financial software company in cross-licensing negotiations with a global computer and software company.
Mr. Clark received a B.S. in computer science and engineering from the Massachusetts Institute of Technology, and obtained his J.D. from Stanford Law School. Prior to legal practice, Mr. Clark worked as a computer consultant in Washington, D.C.
Mr. Clark is registered to practice before the U.S. Patent and Trademark Office and is a member of the District of Columbia and Maryland bars. He also serves as a member of several associations, including the American Intellectual Property Law Association, Maryland Bar Association, District of Columbia Bar Association, American Bar Association and Stanford Law and Technology Association.